Let's look at the most common face shapes... 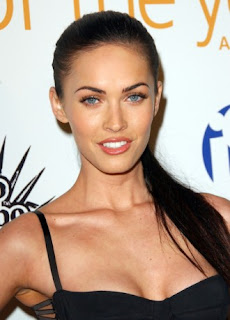 Oval Faces are known for their symmetrical balanced features because of this oval (or egg shape) has became the most sort after shape.
Anything goes when you have an oval face, any hair style, and makeup trend. As the shape is so close to "perfect" you can then focus on any other feature you don't like such as a large nose, high foreheads whatever it might be and focus on hiding it if you wish.
From a makeup artist point of view oval faces can be a little "boring" only because there isn't much you need to change its already pretty much done!

The easiest way to describe a round face is take a oval and pull it outwards. The face is the same full across as its length is down. People mistake round face shape as fat but that's not true, even thin people can have round faces. In fact round is one of the best to have as you age because you will always look young and youthful.

As you can see here on Kirsten Dunst - her cheeks are the same fullness from her round forehead to her jawline creating an almost prefect circle.

Most children and teens will have round or oval faces as their features have not developed yet. Doesn't mean you will always have it.

Oblong/Long face shape is so similar that I just added them in the same categories. The main difference between Oblong and Long is the curved at the forehead and jawline, long has a rounder shape while oblong is slightly square.

Both shapes are elongated ovals, just take an oval and make it longer then it is wide.

Similar to the mistake of "round faces being fat" you don't have to be tall to have a long face.

The easiest way to tell if someone has a square shape is look at their forehead and jawline. The forehead is flat on top and squares off, the chin is flat and square upwards at the jaw. Creating a square! Also keep in mind that the cheeks are also flat and some times on the full shade with the same wide the whole way down, For this reason a squares can easily look round but the forehead will always give it away.

Jessica's best friend is a hairdresser, so it's hard to find a picture where her square shape is notable, he covered it for her quiet well, She's the prefect person to at for hair inspiration on square faces.

Remember how I explained that a long face is an oval elongated, well a rectangle is square elongated.

While a square is pretty much as long as it is wide, a rectangle is longer then it is wide but still the forehead is flat on top and squares off, the chin is flat and square upwards at the jaw. (Just like a square)

Rectangle and square is kind of the new oval, with designer and make-up artist looking the looks that squarer shapes can carry.

Heart Shaped face and inverted triangles are also very similar (As is long and oblong) and they get mixed up a lot.
The main characteristics of a heart shaped face is a pixie like tapered jaw and a rounded forehead creating a heart shape.
They can also have a widows peek but most a rounded forehead is what sets is apart from an inverted triangle.
Miss Jennifer is a prefect example of a heart with her round forehead, tapered jaw and long chin create a cute heart shape.

Inverted triangle is a shape that was just added in for the fun of it, to be honest anyone with an inverted triangle would fit into a heart shaped category but the one main difference is the forehead. Its flat and square.

Both Reese (side) and Jennifer (above) have the same jaw and chin shape but the forehead is different. The same style are suitable for both really, so if you struggle to find information on inverted triangle then heart will do just fine. Triangle or pear shaped face is much fuller at the jawline then the forehead. This of a pear!
Its an unusual shape and minnie Driver was the only one I could think of as an example.

The jaw line is like a square - full and wide
while the forehead is similar to an oval - slender and tapered.

Bangs are a pears best friend and its the only sure way to balance the face.

Another unusually shape and often mistaken for oval. Diamond is fullest at the cheeks and tapered above and below. Creating a diamond shape.

The jaw can be similar to an oval, heart or square while the forehead is similar to a pear.

Posted by Sineadycady at 3:42 AM